«At three intervals, in three dimensions, and with three works, Mustapha Boujemaoui approaches apartment # 22 for the first time as an absolute space (blank page) where to write down his utopias… For some time now, the artist has been exploring the realm of (daily or sentimental) objects specific to our cultural environment (the glass, the newspaper, the sifter…) to make them part of his aesthetic project (objects turn into philosophical objects). Boujemaoui’s latest works are overflowing with vegetable materials, and paint as a chemical medium has been replaced by tea leaves. Boujemaoui’s intervention consists of three works which are coming together over a three week span. Three opening nights are scheduled on Thursday, March 6th, and 13th, and on Wednesday March 19th, 2003. The public will be invited to discover the three installations, and most of all, to become part of the devices envisioned by the artist as traces of a past act or to anticipate a gesture that does not exist yet. The first work which opens the exhibit has been created directly onto the wall as an invitation to enter the artist’s «heavenly world». Super Tea 1 is an installation which takes up the large wall of the main gallery, and a mirror across the wall splits the space in two through virtual dimension… In 2002, Mustapha Boujemaoui made a first video titled «extra-thé de la Caravane» (a hors’ champs production) which marks a turning point in his work, insofar as it claims the permanence of the idea over the non-permanence of the gesture… a remembrance of the performance, it supersedes Super Tea 2. It is a trying work, a sort of performance for the artist as well as for the one watching the video who finds himself confronted to the most basic suspense. A giant glass, an enlarged oversize tea glass, placed in a minimal space, fills itself with tea leaves poured by the artist away from the screen. The tea overflows and makes a pyramid which completely swallows up the container. That very tea which fills the glass, delineating its contour, makes it disappear within its own abundance! Super Tea 3 is a gigantic mark on the floor made with green tea leaves (extra tea). The person visiting apartment # 22 can walk around the room making a creaking sound, and turn, little by little, the tea leaves into tea powder… At the end of the three weeks, the floor will be fully covered with tea powder and the apartment space will be haunted by the traces left by the echoes between the artist, the public and the meeting place… At the dawn of the XXI st century, black is permeating all artistic creation. Boujemaoui’s somber tone is also dictated by the world gloomy mood, but this very somber appearence of the arts puts up a barrier between the cruelty of the world and the heavenly world of the dreaming artist. The dark cloak of the painting/matter will expose the strength of the work/light to come, and Super Tea, just like a super hero, will save us...» A.K. ( translated by Françoise Hradsky ) 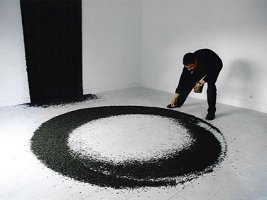 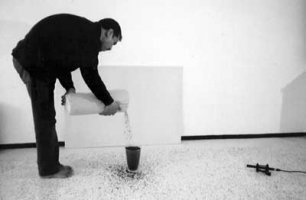