These works are available for projects exhibitions or collections.
vendredi 12 août 2011
Gabriella Ciancimino (b. 1978, lives and works in Palermo) studied painting at the Academy of Fine Arts in Palermo. Ciancimino focalizes on the concept of relationships that transform artworks in moments of meeting/confrontation among individuals. She creates a Free Zone where different communities can find a bond, can experiment new possibilities in their multiplicity of expressions. In her recent works, Ciancimino analyzes the relationship between man and plants by the creation of a landscape that becomes a "place" of reflection and at the same time safeguards the historical memory and collective action. This anthropological study is accompanied by experimental research, which aims to identify dissonant elements to be included in the landscape, thus generating a visual crack that modifies reality, but in an eco-friendly way. Ciancimino’s work in an invitation to a dialogue on the concept of resistance and freedom applied to the relation with the environment, experiencing Social Ecology theorized by Murray Bookchin by involving the community in the creation of the work and the transformation of a place in a space where freedom can be experienced, breaking the hierarchy between Artist and Visitor. She has developed a practice through site-specific actions and collective works using diverse media – as video, music, installation, drawing, graphic design and photography. She showed in exhibitions at Cantieri Culturali all a Zisa (Palermo, 2008), at American Academy, Rome (2009), at RISO - Museo d’Arte Contemporanea della Sicilia (Palermo, 2010), at L’Appartement 22 (Rabat, 2010/2012), at Cardi Black Box Gallery (Milan, 2011) ; as well as the Volume 1 project of "Sentences on the banks and other activities" exhibition project at Darat al Funun (Amman, 2010) and Working For Change. Project for A Moroccan Pavilion at the 54th Venice Biennale (2011, Venice), Biennale Benin (2012) Museo Villa Croce, (Genoa, I 2013), PAV (Turin 2013), Kunsthalle Mulhouse (2013, France). Her works are in some public collections of Palazzo Riso, Museo d’Arte Contemporanea della Sicilia, Palermo (Italy), Museo del Novecento (Milan, Italy), and Frac Provence-Alpes-Côte d’Azur (Marsille, France). 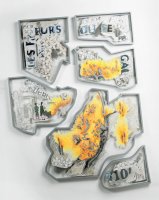 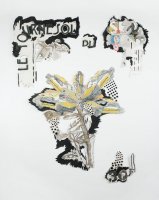 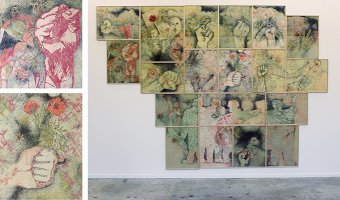