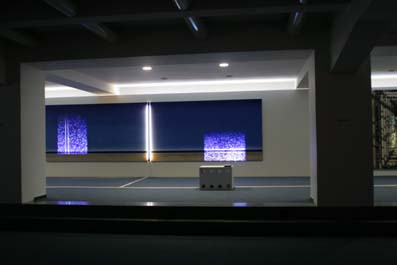 It was some time ago, that a quite curious text came into my hands, talking about the “…desirable and socially legitimate loneliness” of a project, an art project; this concept, giving nowadays the definition of the actual and international form of a creation. Boris GROYS, the well-known author of this presentation, captured once again my attention by offering through his discourse an interesting theory of a virtual future, developed, existing and surviving by the intermediary of an art project. Those thoughts, dedicated to the Moroccan artist Hassan DARSI who is currently working on the concept of a piece of art, living in a process of conception, lasting between auto crossing past and future, created for a special context (Casablanca), gave me the main axe of a reflection which I had to develop for the global presentation of a vision, based on a quite challenging theme: Re reading the Future.

“If one has a project – or more precisely, is living in a project – one always is already in the future. One is working on something that (still) cannot be shown to others, that remains concealed and incommunicable. The project allows one to emigrate from the present into a virtual future, thereby causing a temporal rupture between oneself and everyone else, for they have not yet arrived in this future and are still waiting for the future to happen. But the author of the project already knows what the future will look like, since his project is nothing other than a description of this future.”

Such a thesis can suggest logically the feeling of alienation and solitude attended the contemporary creative process, looking forward from the moment of its beginning, ensuring so a minimal percentage competition in a time when a global product is a changing money even when we speak about something so abstract like the creation of the art. The 90s of the XX century created a conception of art as a projection of the idea in the future, a documented reading of the phases marking the evolution of its existence. The so-called “process” became a byword and almost an obligatory condition of the beginning of a carrier in an area of visual arts. Today the byword created a way of an existence to which adapted all artistic circles and which with a magnetic optimism offered a power over something very important but still untamed: time. Transformed imperceptibly in methodic-disciplinary model of a realization of the art object, the “project” controls not only the process of the successfully finale, but also involves a possibly foresight of the separate phases, defining its genesis. Accomplished dream or illusion for one tired contemporary time, the new formula for the creation of the art is an inestimable pretext of both actions: financing and documentation. Treasuring the factology belonged to the embryonic stage of the “project” and ensuring its social legitimacy in the present with budget’s value synthesizing the thesis of Groys, by whom the creation of the art today is a process, whose essence is a projection in the future and condemn to solitude because of its virtual life in the presence.

In the context of the visual arts the factor time is liable to a discussion adequate to the far remote from Lessing’s romantic notion of “latent temporality” of art work. Existing a chronological narrative reading giving the possibility for contemporary reading of the retold plot and of the existence of the work in parallel time subordinate to own virtual dynamic. In 1800 when such a theory put a question to the autonomy of art, the factor time undertook metamorphoses in its transformation, passing through the mode of ephemerality and today reaching to the ability to transform in a projection of the future.

The late 80s predicted the coming 20 years as a bang of the electronic medium in its capacity of a technological refined way of the creation of the art – rut applicable to every type of production and gradually incorporated the craftsmanship. Destroying the hierarchy of the genres, which the history of the art created in the centuries, the art product of the future proved a hybrid, materializing the dream of the secession: the idea of Art Total, which transforms the object, interior and poster in the art work. Of course moved in century forward they are a high technological model of the creative time. Today, thinking that we live in the so-called foreseeing future less the art to become a dangerous complex – it looks exhausted and doomed to monotonous repetition. Re-reading the future is a concrete proposal for a new critics’ view forward and an exercise can be enriching if the searching of the new vision starts from an effort for striking a balance of the far-off. Regeneration of the preceding years through recycling of its components is maybe the necessary approach to create an organic vision of another possibly future. And exactly this principle is in the concept of everyone’s “project” meaning as an artwork and existing trough the legitimated by its witnesses phases of own history.

Re-reading the future made in Bulgaria aims at the multifacet presentation of the idea of “project” as artwork and in its ability to synthesize the past and future as a convertible process. Re-reading the future made in Bulgaria aims at striking a balance of the hybrid character of art today in a time when identity and culture are seemingly erased in the name of the international character of the art product. Striking at the illusion of the global, the presented selection of artists emphasizes the contradiction as a cultural propaganda of our time. Is it the figure of a so-called “international artist” really, whose vision ignores the geographical belonging? And how can you interpret on this occasion the simultaneously frenetic mania of keeping “the cultural diversity”? Is it possible that a contemporary Renaissance of almost outdated art mediums is underway, which connected in four visions unifies this specially searched and definitely polar difference in the attempt of synthesis view to projected convertible future? I hope to become an answer by the proposed multinational selection of visual presentations made according to the prototype of projected historicity, devoid of the presence.