Perspective Strikes Back
Exhibition project in two parts, at L’appartement 22:

The exhibition, Perspective Stikes Back was originally held in Doosan Gallery, Seoul in December 17, 2009 – January 14, 2010 and it is now invited to travel to L’appartement22. For this time in Rabat, it is re-designed to hold in two series of exhibitions, and also two more artists, Area Park and Heidi Vogels are joining this time at L’appartement 22 in order to extend the original curatorial vision. First part of exhibition (July 15-August 28, 2010) presents Ikjung Cho, Minouk Lim, Area Park and Heidi Vogels, and the second part of the exhibition (Sept.3 –Oct.3, 2010) will open with the works by artists, siren eun young jung, Part-time Suite and Hyangro Yoon.

The Perspective Strikes Back exhibition reconstitutes the modern, contemporary scene through the eye of others inside our society, critically reconsidering the developer growth myth that has continued in Korean society until today. The curation was inspired by artist Minouk Lim’s SOS performance, which helped rediscover the constructed landscape on the banks of the Han River and the modern version of vanities, as well as Okwui Enwezor’s notion of andromodernity defining the developmental modernity of East Asian countries.

The history of Korean-style development, often referred to as ’the Miracle on the Han River,’ constitutes the strong foundations of the current mainstream of Korean society. According to curator Okwui Enwezor, in his article Modernity and Postcolonial Ambivalence (Altermodern catalog, Tate, London 2009), Korean modernization is a typical example of developing modernity through adoption of the Western model of modernization (supermodernity), which is considered as the sole category of the developed and advanced. He designates this developing modernity as andromodernity, meaning a hybrid form of modernity, found especially in countries like China, India and South Korea. Such modernity is achieved through a kind of accelerated development, while also devising alternative models of development. It is understood to embody very masculine traits, since it’s principal emphasis is on development or modernization. In most East Asian countries, it has been reinforced through the incorporation of the deep-rooted patriarchal tradition. Thus, it is obviously noted that the main discourse of the state is quite centered on heterosexuality, masculism, and familism.

With the desire of the Faustian or pseudo-Faustian developer, the society is rushing from the condensed growth model of the past to today’s paradoxical ‘Green Growth’ plan, a more evolved form. It is simultaneously and constantly reproducing various invisible beings who have been drifted from the developer’s propulsive force. The exhibition pays attention to certain kinds of social derelicts or undoers who are not operating the musculine narrative of the state, attempting to reinterpret their struggles as new possibility. It not only aims to report the problems of the present national situation under the new Korean government, but also deals with the marginalized narratives that constantly deviate from those of the solid Korean mainstream epic. In particular, by applying feminist perspectives to these issues, it explores the complex constitution of gender inside the society and the ramifications of its representations, showing the perspectives of younger generation women who try to re-establish themselves out of patriarchal conflicts or all kinds of violence.

The works of this exhibition disclose the reflective areas which can be drawn out of the drifting lives in society, and give an opportunity to consider the ambivalent and contradictory attributes of contemporary modernity that is still under formation through the tensions of different regional conditions in our global era. They also achieve an interesting complexity of gender formation that sublates the traditional gender hierarchy influenced by the domestic civil progress. Accordingly, this exhibition attempts to shed light on how the present of our society will be able to be reorganized and what complex process of modernity or contemporaneity found in the manifestation of the now-invisible subjects are undergoing. And what is required now is the search for ways to counterattack and reverse the ‘possible presents’, that is, a ‘future to come’ for us by discovering the many-sided beings. The position of excluded individuals and their different viewpoints strike back to the recently rebooting monotonous legacy of “development and growth.“ Now we meet the hidden adversaries who produce antagonistic narratives against the monstrosity of our society. The value of inoperativeness resonates here, while irregular perspectives reconstitute another modernity to come.

* Works in the Exhibition:

Minouk Lim’s film entitled SOS-Adoptive Dissensus (2009) documented the performance to take a cruise down the Han River in March, 2009, disclosing social issues in Korea including Pal-Sib-Pal-Man-Won-Se-Dae (880-thousand-won generation, mostly 20s in Korean society)’ and Bi-Jeon-Hyang-Jang-Ki-Soo (unconverted political prisoners) over the landscape of another construction project called “Han River Renaissance.” Through this 44-minute long single-channel video, the audience will follow the captain’s announcement and finally come to find the three different beings on the river bank: young people who are demonstrating, reflecting the light with mirrors, unsettled young lovers who are running along the bank of Nodeul Island, uncertain where to go, and the long-term political prisoners who are victims of the binary ‘security’ discourse under the North-South ideological conflict as in the cold war. In this way, we encounter not only contemporary scenes produced by modern Korea but also the vanitas of the growth myth in the flickering lights of the row of apartments by the riverside, recognizing that this persistent desire of developmental growth nevertheless reappears endlessly with changed faces.

Ikjung Cho presents the film, Four Refrigerator (2009), saying in an aside about her troubles with the men closest to her- for example, a patriarchal conflict with her father and an estrangement between her boyfriend and herself due to the class gap and the man’s complex. The second video by Cho, Room for Two (2009), is a fictional documentary that tells a story about a woman involved in an uncomfortable and awkward relationship with an old man living alone for the purpose of finding a place where she would be able to spend time together with her financially inadequate boyfirend. Both of these show the weird and subtle relationship in which a young woman has to negotiate with different men in different positions in the social hierarchy, class level and generational strata, in order to obtain her own place and status.

Narrating Melancholy is a project that was developed during a Dutch artist Heidi Vogels’ stay and research in Seoul, Korea 2008. The project consists of an archive of images and text documents, investigating how the specific spatial and social structures of the city stimulate the sentiment of disposition. In Seoul, where the urban landscape is marked by compressed growth, the relationships of private and public domain are reflected and defined in the shifting relationships between spatial and social structures of the city. Questioning how that translates in the experience and meaning of the sentiment that is rooted in the connections between time, place and space, the artist began to exchange views on melancholy in conversation with people during her stay in Seoul. A network of relationships grew rapidly and the personal stories varied greatly: from melancholia as a medical diagnosis, to the rejection of a loved one, to simply the resistance of social pressure of unwritten rules and expectations. Here, the concept of melancholy is understood in the dynamic between related opposites: the real and the imagination of the real, and time and timelessness, which conceive the condition of unfold narration.

Area Park has observed and documented in his several different series of photography the scene of struggling and the consequence from the ideological division of Korean society. In this exhibition, his three different series are presented: 386 Generation is one of the earliest works by the artist when he was late teen of 80s. This series lively captures the scene of late 80s political turbulence and also focus on its daily dread figures from young people’s heavy demonstration for the democracy against the ruling power of dictator government, a fatigue of armed police who rest with a sip of cigarette after battling defense against the demonstrating students, and a elementary school boy who goes back to home by passing through tear gas as well as the row of armed police. About 10 year later the artist encountered and zoomed in diverse citizens or inhabitants of Seoul in the both series of Hello, Chunggye Brooklet and Carrying a life in Seoul, in which each anonymous people becomes a small peculiar monument of the uncertainty of life from the rapidly and dramatically developed and changed society in last 40 years.

Artist siren eun young jung’s three video works, The Masquerading Moments (2009), The Unexpected Response (2009) and The Rehearsal (2009) feature the female performers of Yeosung gukgeuk (women’s Korean musical) who play male characters. Yeosung gukgeuk started in the late 1940s as a new type of changgeuk (Korean traditional musical). Although the strong popularity it enjoyed during the 50s and 60s has faded away nowadays, this special kind of play still possesses a very singular quality of subversiveness and queerness in that it is performed only by female actors who cover characters of all different ages as well as both genders (male/female). The artist took their bodily gestures, found both on and off stage – that is, their performances, observing their equivocal, complicated gender representations. By capturing the irony whereby these actresses actively embody and appropriate the Korean modern masculinity – such as typical Korean macho men’s behaviours –, the artist corroborates that modernity is still on the progress through more complexity of gender representation and its complicated performances of identity formation.

Hyangro Yoon’s drawings like The Secret Series (2008) and Criminal Lovers (2008), infused in a delicate and strange atmosphere, suggest the suppression imposed on and experienced by women in and outside the home, or sexual harassment to which children and women are exposed. Through the process of appropriating images from various kinds of old design books and modifying them, the artist moderates the expressive nature of drawing and creates some sense of distance and objectivity. This cold neutralization of images objectifies an individual’s particular experience or trauma, extending it to the social level. It also persuades the audience to recognize how intensively the violence in social units such as school and home is internalized.

Part-time Suite is a collective project group consisting of Miyeon Lee, Byungjae Lee and Jaeyoung Park. After each graduating from different art schools in Seoul in February 2009, the three artists founded the collective in April 2009. They produced from a series of searches for spaces in the city. They rent vacant spaces in urban areas for a month and create their own creative spaces, take a contrarian’s approach and fling off the passive resignation that younger artists can enter the art world only by being selected. They not only constantly look for and entirely occupy urban transitory spaces but also present the language of the new generation through their lyrical and beautiful installations and performances. After their two projects during the past six months, Under Interior (in the basement of a building in Ahyeon-dong, Seoul) and Off-Off-Stage (in an unoccupied plot hidden near Gwanghwamun), they are going to show their third space and project, Loop the Loop: viewers should leave from Doosan Gallery with maps in their hands and go to Part-time Suite’s space in the roof of an old building nearby. Since Doosan gallery is located in Jongro 5th, very traditional market area of center of Seoul, you can view the landscape of Korean urban construction from 60s to today. PTS’s poetically performs on the edge of the rooftop, interfering into the grand development’s landscape of this area. This group of artists is converting the feeble position of youths drifting away, feeling stunned and bewildered by the possibility of creative life, and in this very sense, they are revealing a hope in own world.

This exhibition is supported by 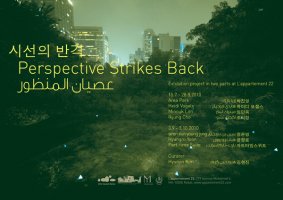 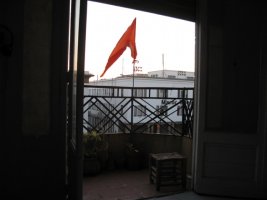