Sur Place testifies to Justine Triet’s desire to “refictionalize” the real and to theatricize the documentary in order to attempt to extract from it all of its complexity. At the margins of film and video, Justine Triet researches social situations characterized by great tension (student protests or the last days of an electoral campaign) and she “shoots” (thus taking this term used by the paparazzi with all of its violence) the faces and the people, seized in the intensity of these moments. Sur place was filmed during the anti-CPE protests in Paris in 2006. They anchor the film, but very quickly we forget the precise context of this protest and let ourselves be caught up by it, by its rhythm. We observe the ballet of the forces present: young protesters fighting there with the forces of the order, the CRS, journalists looking for shocking images for their editors and for the crowd. The crowd here is a compact mass, uniform and primitive, shaking in the same direction, with the same force. Its rumbling comes to punctuate the comedic sketches of the young protesters that the crowd surrounds like ancient choirs. We are there witnessing a theatrical representation of a battle; we are there immerged despite ourselves in the danger of a frenetic crowd. The artist herself disappears, inscribing herself in the heart of this event. Like Steve McQueen who accentuates the use of the body in political struggle, she frames gestures here, the play of legs… Music accompanies the film’s dramaturgy and, like a musical partition, the editing of the images obeys rhythmic variations made from “imperfect cadences” in order to better relaunch the action before returning to the final calm. The artist begins with a situation tied to the marked social and political situation but which goes beyond the documentary and narrative dimension attached to it through a work with images and their mis-en-scène. She thus reveals their ambiguity and frustrates the stereotyped vision of this kind of event as it is relayed by the media in ways too often Manichean and biased.

Justine’s proposal is quasi-silent: neither analytical nor didactic; she is above all artistic. 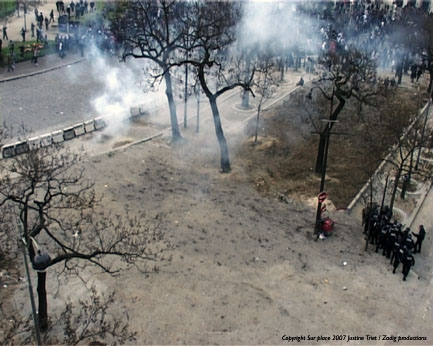 * Justine Triet entered the Ecole Nationale Supérieure des Beaux-arts de Paris (Institute of Fine Arts in Paris) in 1998 at the age of twenty and received her degree in fine arts. In 2007, she produced Sur Place which received the jury’s special mention at the Cinema Festival in Brive (France). The Berardo Museum of Modern and Contemporary Art in Lisbon acquired this video for its collection. This film also received a prize for quality from CNC. Sur Place is also in the new media collection at the Centre Pompidou. Triet is currently at work on a new film in the outskirts of Sao Paulo.

**Muriel Enjalran, born in 1979 in France, is an art critic and independent curator. Since 2006, she has also served as the manager for the French art centers’ network projects (French association for the development of art centers). She currently works in connection the Portuguese, Brazilian, and Moroccan artistic communities in her collaboration with L’appartement 22 in Rabat. After the exhibition Continents à la dérive (Continents adrift) at the Crac Languedoc Roussillon in Sète (France) in March 2009, she is now preparing two curatorial projects for 2010: the exhibition Images suggestives (Suggestive images) in Belgrade and Sarajevo and an exhibition at the Museu de Arte Moderna da Bahia (Brazil).