Concert with the "Master Musicians of Jajouka" led by Bachir Attar and Duke Garwood, on Saturday 12 February 2011 at 7 pm.

Artist Shezad Dawood creates a monumental version of the dream machine invented by Brion Gysin, which became an icon in capturing the interest of several artists and scientists. Dawood focuses on the ’New Dream Machine Project’ to get closer to the action of the artist and writer Brion Gysin in Morocco in the sixties, recreating his "Dream Machine", and influenced by Sufi philosophy and the hallucinatory action of light.

At the Cinematheque de Tanger, a concert performance resumes the 1968 recording of the legendary Brian Jones (Rolling Stones) and ’Master Musicians of Jajouka’ (which played regularly at the "1001 Nights", Brion Gysin’s famous Coffee Shop in Tangiers). This new generation of "Master Musicians" and the famous British guitarist Duke Garwood try to recreate that moment of legend around the giant dream machine that will be installed for the occasion. Shezad Dawood is also making a 16-mm documentary film around this event.

This project is developed in Morocco by Shezad Dawood, in collaboration with L’appartement 22 and Cinémathèque de Tanger. 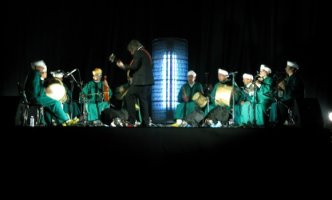